think games are just for fun? think again Persuasive Games is an innovator in games beyond entertainment
Founded in 2003 by technology, marketing, design, and education professionals, we are an independent developer of games for advertising, corporate learning, K-12 education, politics and political outreach, and other uses outside entertainment.
we also consult and advise to help  you avoid making games for bad reasons
(like: the specter of gamification,
brand manager jealousy,
false dreams of youth,
trendiness,
caprice...)
We create original games as well as offering our services to selected clients
some of the folks we've worked with: 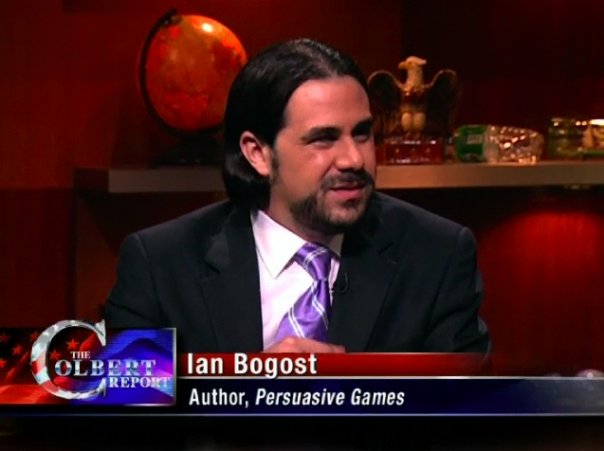 Dr. Ian Bogost, a founding partner and the chief designer at Persuasive Games, is a world-renowned technology researcher and writer. He is Ivan Allen College Distinguished Chair in Media Studies and Professor of Interactive Computing at the Georgia Institute of Technology, where he also holds an appointment in the Scheller College of Business. Bogost is also a Contributing Editor at The Atlantic.

Among his many books is Persuasive Games: The Expressive Power of Videogames (MIT Press, 2007), a seminal work on the uses of games in politics, business, and learning. It forms the basis of our studio's design philosophy.

We call it procedural rhetoric: creating a simplified, simulated model of a thing in the world so that players can understand how it works (or how it's broken and needs fixing).

Over the years, our work has garnered substantial press in major media outlets worldwide
some of the folks who've covered us:

Games communicate differently from other media they not only deliver messages but also simulate experiences Our games influence players to take action through gameplay
While often thought to be
just a leisure activity,
games can also be
rhetorical tools.